Forbidden Planet is a 1956 MGM science fiction film directed by Fred M. Wilcox, a screenplay by Cyril Hume, and starring Walter Pidgeon, Anne Francis, and Leslie Nielsen. Forbidden Planet is the first science fiction film in which humans are depicted traveling in a starship of their own creation. It was also the very first science fiction film set entirely on another world in interstellar space, far away from the planet Earth. Forbidden Planet is considered one of the great science fiction films of the 1950s,a precursor of what was to come for the science fiction film genre in the decades that followed. The characters and isolated setting have been compared to those in William Shakespeare's The Tempest, and its plot does contain certain story analogues and a reference to one section of Jung's theory on the collective subconscious. Forbidden Planet features special effects for which A. Arnold Gillespie, Irving G. Ries, and Wesley C. Miller were nominated for an Academy Award; it was the only major award nomination the film received. The film features the first groundbreaking use of an entirely electronic musical score by Louis and Bebe Barron. Forbidden Planet also featured Robby the Robot, the first film robot that was more than just a mechanical "tin can" on legs; Robby displays a distinct personality and is a complete supporting character in the film. The film was entered into the Library of Congress' National Film Registry in 2013, being deemed "culturally, historically, or aesthetically significant." 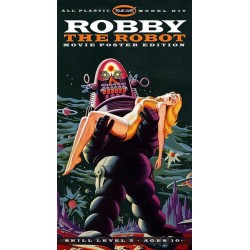