Macross Frontier (マクロスF (フロンティア) Makurosu Furontia) is a Japanese animated science fiction space drama that aired in Japan on MBS from April 3, 2008 to September 25, 2008. It is the most recent Japanese anime television series set in the Macross universe. Animated by Satelight, premiered Japan on MBS on April 3, 2008. A pre-broadcast airing, called Macross Frontier Deculture Edition or Macross Special Edition (マクロスSP版 Makurosu SP Ban), showcasing a preview version of the first episode was aired on December 23, 2007. The series also received its satellite television premiere in Japan on Animax on April 7, 2008. Macross Frontier is the story of a human space colony fleet trying to find a habitable planet near the center of the Milky Way Galaxy. The story focuses on three young adults (a famed pop singer, a private military pilot, and a rising pop singer) and the events that occur around them as the fleet faces a crisis of alien origin 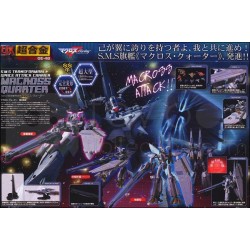