Panzer World Galient (機甲界ガリアン Kikōkai Garian?) is a 1984 Japanese fantasy and science fiction anime TV series produced by Sunrise company. Argumento Set in a far flung medieval-looking world at an indeterminate time in the future, we are introduced to prince Joldi who has become a rebel with the aid of his brother, Hai Shartatt. Their goal is to stop their father Madaru, who has become a power hungry despot with a desire to conquer their world using giant robotic machines. In the vein of the heroic seeker, prince Joldi finds a legendary sword wielding the red giant robot called Galient and uses it in the fight to save their world from his father. His brother Hai Shartatt though has a different ambition and as the series evolves it is revealed that his true intentions are vastly different from those of his brother Joldi. 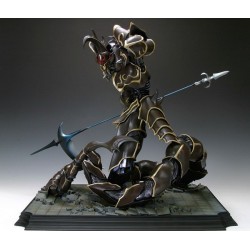